Our client’s large family of five was shrinking through the years, so they decided it was time for a downsize and a move from Westlake Village to Oak Park. They found the ideal single-story home on a large flag lot, but it needed a major overhaul, starting with the awkward spatial floorplan.

These clients knew the home needed much work. They were looking for a firm that could handle the necessary architectural spatial redesign, interior design details, and finishes as well as deliver a high-quality remodeling experience. JRP was just the team to take on this harmonious transitional renovation.

JRP’s design team got right to work on reconfiguring the entry by adding a new foyer and hallway leading to the enlarged kitchen while removing walls to open up the family room. The kitchen now boasts a 6’ x 10’ center island with natural quartz countertops. Stacked cabinetry was added for both storage and aesthetic to maximize the 10’ ceiling heights. Thanks to the large multi-slide doors in the family room, the kitchen area now flows naturally toward the outdoors, maximizing its connection to the backyard patio and entertaining space.

Light-filled and serene, the gracious master suite is a haven of peace with its ethereal color palette and curated amenities. The vanity, with its expanse of Sunstone Celestial countertops and the large curbless shower, add elements of luxury to this master retreat. Classy, simple, and clean, this harmonious transitional renovation’s open-space design with its neutral palette and clean look adds traditional flair to the transitional-style our clients desired. 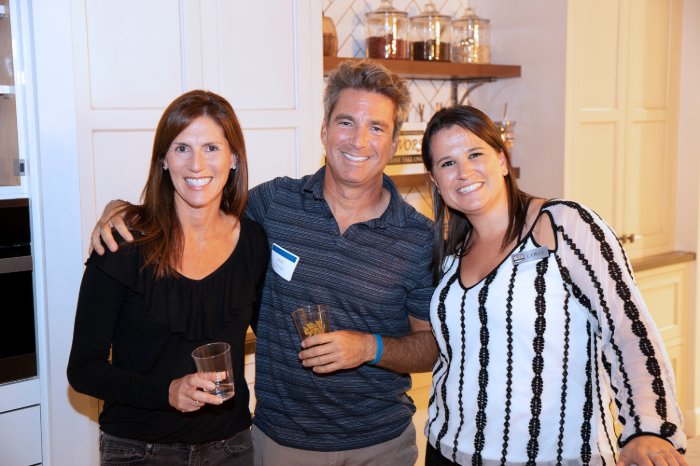 Pam and Mike with Corey, 2018 at JRP September Open House

“What separated Justin and JRP Design from the other three contractors we interviewed for our complete interior and exterior home remodel was Justin’s superior design and vision for the space. Justin’s unique ideas allowed us to transform this older, outdated home into a more modern, open floor plan. The ability to actually see his plan on the big screen at Justin’s office prior to the project beginning took all the guess work out of what it would look like after the project was complete and allowed us to make changes before the work began. JRP designers help you pick out flooring material, cabinetry, finishes, etc. so that it all comes together at the end.

Our current open floor plan, transitional kitchen with a giant island is the envy of the neighborhood. And true to his word, unlike other contractors, when any issues arose after the project was complete Justin and his team were there to makes things right. It is with the utmost confidence that JRP will do a great job that we recommend Justin and the JRP team for any of your home remodel needs.” – Mike & Pam

Working From Home: Setting Up The Perfect Home Office

COVID-19: Our Commitment to Health and Safety

Don't miss a dose of JRP's award-winning design and build inspiration straight to your inbox.

Ready to Design Your Dreams?

Whether you are looking to upgrade your kitchen, add a new room addition, or a whole home remodel, we are here to design and build your dreams into reality.