Client Review: Timeless Transitional – For three years this Westlake Village couple lived in a house that didn’t quite fit their needs.

With frequent houseguests staying for weeks at a time, the family needed more space, particularly in the cramped kitchen. So began their search for a new home. The couple viewed several residences however, they realized nothing compared to the house they already owned. The family knew JRP by reputation from friends who were JRP clients. After consulting with our team, the couple agreed: a whole-home renovation was the way to their timeless transitional dream home. Inspired by top architectural magazines, the couple had a clear vision of how their home should look and feel: a clean, open, modern space with a mix of details that played to the family’s lively spirit.

“JRP did a beautiful job remodeling our 1970’s home into a modern, but functional coastal California oasis. Both the outcome and the process to get there, far exceeded our expectations.

Justin and his team’s creativity and big picture thinking caused us to rethink our approach and resulted in a significantly better outcome than originally planned.  From the start of design to the completion of building and through to follow-ups, JRP provided an outstanding customer experience.  The design process was a true partnership – Justin and Jen were receptive to all of our feedback and concerns and worked on numerous iterations until we were comfortable with the design.

The building phase was smooth, efficient, transparent, and actually fun with Vinny leading us step-by-step through the process. The highly detailed planning led to minimal surprises throughout the project and therefore few unexpected, but required change orders.  Of course, with a project of this size, issues did arise. However, Vinny and the JRP team took accountability and just got right into problem-solving mode until any issue was resolved.  That action alone removed a great stressor from the entire process. It truly made us feel like we were partners. We were extremely pleased with the quality and craftsmanship of the work, as well as the coordination of all the subcontractors required in the early building phases.

The entire JRP team is extremely talented, professional, hard-working, thorough, willing to go the “extra mile”, and especially good-natured, fun and family-friendly! We love our remodeled home and would highly recommend them for any remodeling projects.” – Mary 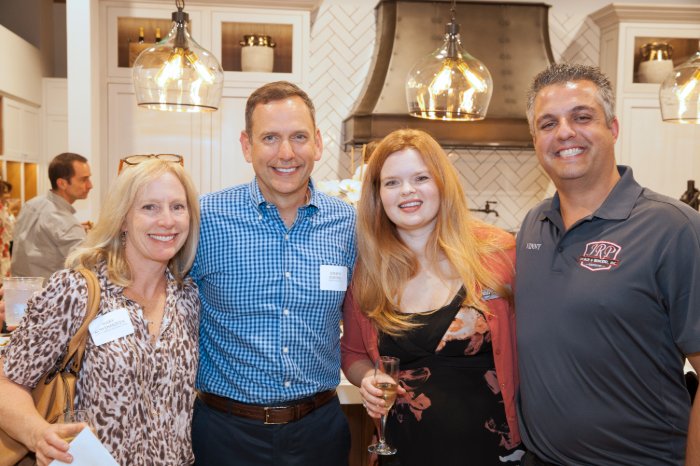 Mary and Joe, 2018 at JRP Open House with Jennifer & Vinny

Working From Home: Setting Up The Perfect Home Office

COVID-19: Our Commitment to Health and Safety

Don't miss a dose of JRP's award-winning design and build inspiration straight to your inbox.

Ready to Design Your Dreams?

Whether you are looking to upgrade your kitchen, add a new room addition, or a whole home remodel, we are here to design and build your dreams into reality.